Home canning or bottling, also known colloquially as putting up or processing, is the process of preserving foods, in particular, fruits, vegetables, and meats, by packing them into glass jars and then heating the jars to kill the organisms that would create spoilage.

Also See: How To Can and What is Canning? 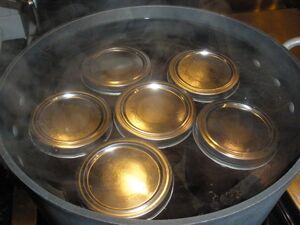 In North America, home canning is usually done in Mason jars, which have thicker walls than single-use commercial glass jars. Unless the food being preserved has a high acid (pH <4.6), salt or sugar content (resulting in water availability <0.85), such as pickles or jellies, the filled jars are also processed under pressure in a canner, a specialized type of pressure cooker. Ordinary Pressure Cookers are not recommended for canning as their smaller size and the reduced thickness of the cooker wall will not allow for the correct building up and reducing time of pressure, which is factored into the overall processing time and therefore will not destroy all the harmful microorganisms. The goal in using a pressure canner is to achieve a "botulinum cook" of 121°C for 3 minutes, throughout the entire volume of canned product. Canners often incorporate racks to hold Mason jars, and pressure canners are capable of achieving the elevated temperatures needed to prevent spoilage.

The most common configuration is a Mason jar with a flat lid and screw ring. The lid is generally made of plated or painted steel, with an elastomeric washer or gasket bonded to the underside of the rim. The lid also incorporates a slightly dimpled shape, which acts as an indicator of the vacuum (or lack thereof) inside a sealed jar. A newer reusable lid is now available that uses a flat plastic disk with a reusable rubber gasket. The ring threads onto the top of the jar over the lid to hold it in place while the jar cools after processing; the ring can be removed once a vacuum has been established in the jar. Jars are commonly in either pint or quart capacities, with two opening diameters, known as "standard" and "wide mouth".

When a jar has cooled and is properly sealed, pressing the dimple on the lid will not make any sound. An improperly sealed jar will allow the dimple to move up and down, sometimes making a popping noise. Lack of this noise does not necessarily indicate that the food in the jar is properly preserved. Typically, during the cooling process, a properly sealed lid will pop once as the pressure inside the jar is reduced enough that atmospheric pressure pushes the lid inward.

Older variations had a ceramic seal inside a one-piece zinc lid. Another method that is no longer recommended was the use of layer of hot paraffin wax poured directly over the top of the food (especially jams and jellies) to seal it from air, thus reducing growth of aerobic microorganisms like mold.

While it is possible to safely preserve many kinds of foodstuffs, home canning can expose consumers to botulism and other kinds of food poisoning if done incorrectly. The most common source of food-borne botulism is home-canned foods prepared in an unsafe manner.Safety measures must be taken when performing home canning, since ingestion of toxin in food produced by Clostridium botulinum can cause death. Because of the high risk of illness or death associated with improper canning techniques, the United States Department of Agriculture (USDA) considers it critical that consumers who intend to can at home obtain proper and current information from a reliable source. At the basis of these recommendations is the balance between bringing the food to a high enough temperature for a long enough time that spoilage and disease-producing microorganisms are killed, while not heating the food so much that it loses nutritive value or palatability.

Retrieved from "https://canning.fandom.com/wiki/Home_Canning?oldid=4262"
Community content is available under CC-BY-SA unless otherwise noted.