"Pickling", also known as "brining" or "corning", is the process of preserving food by anaerobic fermentation in brine to produce lactic acid, or marinating and storing it in an acid solution, usually vinegar (acetic acid). The resulting food is called a pickle. This procedure gives the food a salty or sour taste. In South Asia, edible oils are used as the pickling medium with vinegar. 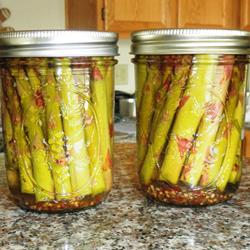 Another distinguishing characteristic is a pH less than 4.6, which is sufficient to kill most bacteria. Pickling can preserve perishable foods for months. Antimicrobial herbs and spices, such as mustard seed, garlic, cinnamon or cloves, are often added. If the food contains sufficient moisture, a pickling brine may be produced simply by adding dry salt. For example, sauerkraut and Korean kimchi are produced by salting the vegetables to draw out excess water. Natural fermentation at room temperature, by lactic acid bacteria, produces the required acidity. Other pickles are made by placing vegetables in vinegar. Unlike the canning process, pickling (which includes fermentation) does not require that the food be completely sterile before it is sealed. The acidity or salinity of the solution, the temperature of fermentation, and the exclusion of oxygen determine which microorganisms dominate, and determine the flavor of the end product.

When both salt concentration and temperature are low, Leuconostoc mesenteroides dominates, producing a mix of acids, alcohol, and aroma compounds. At higher temperatures Lactobacillus plantarum dominates, which produces primarily lactic acid. Many pickles start with Leuconostoc, and change to Lactobacillus with higher acidity.

Retrieved from "https://canning.fandom.com/wiki/Pickling?oldid=4270"
Community content is available under CC-BY-SA unless otherwise noted.