What is a pressure cooker?Edit 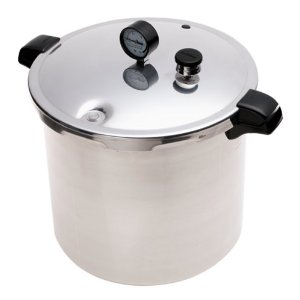 Modern pressure canners are lightweight, thin-walled aluminum or stainless steel kettles. Most have twist-on lids fitted with gaskets. There are still one or two that have screw-down knobs around the lid on the canner.

They have removable racks, a weighted vent port (steam vent), and a safety vent. They also have either a dial gauge for indicating the pressure or a weighted gauge (which both regulates the pressure and indicates, by rattling). Pressure canners can usually handle either one layer of quart or smaller size jars, or deep enough for two layers of pint or smaller size jars.

Unlike a water bath canner, the jars do not need to be completely covered with water. The directions that came with the pressure canner tell you how many cups of water to add in order for it to generate the right amount of pressure. You vent the pressure canner a considerable length of time while the water boils (with the jars in and the lid on). This causes steam to push out all the air. So the jars are in a space filled with only boiling water and steam. In theory, both will have the same temperature, which will be 240 F, substantially high than 212 F of an open water bath canner, due to the increased pressure. And since there is no air, just water vapor, the heat will be easily conducted to all sides of the jars.

Source: Pick Your Own

Retrieved from "https://canning.fandom.com/wiki/Pressure_Cookers?oldid=4273"
Community content is available under CC-BY-SA unless otherwise noted.