The body and end are brought together in a seamer and held in place by the base plate and chuck, respectively. The base plate provides a sure footing for the can body during the seaming operation and the chuck fits snugly into the end (lid). The result is the countersink of the end sits inside the top of the can body just below the flange. The end curl protrudes slightly beyond the flange. 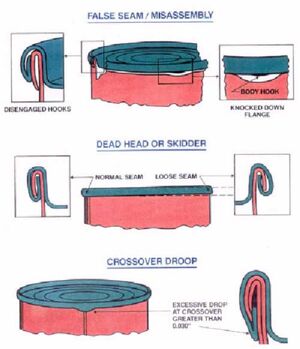 Once brought together in the seamer, the seaming head presses a first operation roller against the end curl. The end curl is pressed against the flange curling it in toward the body and under the flange. The flange is also bent downward, and the end and body are now loosely joined together. The first operation roller is then retracted. At this point five thicknesses of steel exist in the seam. From the outside in they are:

The seaming head then engages the second operation roller against the partly formed seam. The second operation presses all five steel components together tightly to form the final seal. The five layers in the final seam are then called; a) End, b) Body Hook, c) Cover Hook, d) Body, e) Countersink. All sanitary cans require a filling medium within the seam because otherwise the metal-to-metal contact will not maintain a hermetic seal. In most cases, a rubberized compound is placed inside the end curl radius, forming the critical seal between the end and the body. Probably the most important innovation since the introduction of double seams is the welded side seam. Prior to the welded side seam, the can body was folded and/or soldered together, leaving a relatively thick side seam. The thick side seam required that the side seam end juncture at the end curl to have more metal to curl around before closing in behind the Body Hook or flange, with a greater opportunity for error.

Many different parts during the seaming process are critical in ensuring that a can is airtight and vacuum sealed. The dangers of a can that is not hermetically sealed are contamination by foreign objects (bacteria or fungicide sprays), or that the can could leak or spoil.

One important part is the seamer setup. This process is usually performed by an experienced technician. Amongst the parts that need setup are seamer rolls and chucks which have to be set in their exact position (using a feeler gauge or a clearance gauge). The lifter pressure and position, roll and chuck designs, tooling wear, and bearing wear all contribute to a good double seam.

Incorrect setups can be non-intuitive. For example, due to the springback effect, a seam can appear loose, when in reality it was closed too tight and has opened up like a spring. For this reason, experienced operators and good seamer setup are critical to ensure that double seams are properly closed.

Quality control usually involves taking full cans from the line - one per seamer head, at least once or twice per shift, and performing a teardown operation (wrinkle/tightness), mechanical tests (external thickness, seamer length/height and countersink) as well as cutting the seam open with a twin blade saw and measuring with a double seam inspection system. The combination of these measurements will determine the seam's quality. Use of a Statistical Process Control (SPC) software in conjunction with a manual double-seam monitor, computerized double seam scanner, or even a fully automatic double seam inspection system makes the laborious process of double seam inspection faster and much more accurate. Statistically tracking the performance of each head or seaming station of the can seamer allows for better prediction of can seamer issues, and may be used to plan maintenance when convenient, rather than to simply react after bad or unsafe cans have been produced.

Retrieved from "https://canning.fandom.com/wiki/Seaming?oldid=4347"
Community content is available under CC-BY-SA unless otherwise noted.