Canning is a method of preserving food in which the food contents are processed and sealed in an airtight container. Canning provides a typical shelf life ranging from one to five years, although under specific circumstances a freeze-dried canned product, such as canned, dried lentils, can last as long as 30 years in an edible state. 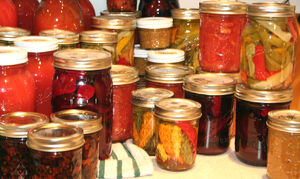 In 1795 the French military offered a cash prize of 12,000 francs for a new method to preserve food. Nicolas Appert suggested canning and the process was first proven in 1806 in test with the French navy and the prize awarded in 1809 or 1810. The packaging prevents microorganisms from entering and proliferating inside.

To prevent the food from being spoiled before and during containment, a number of methods are used: pasteurisation, boiling (and other applications of high temperature over a period of time), refrigeration, freezing, drying, vacuum treatment, antimicrobial agents that are natural to the recipe of the foods being preserved, a sufficient dose of ionizing radiation, submersion in a strong saline solution, acid, base, osmotically extreme (for example very sugary) or other microbially-challenging environments.

Other than sterilization, no method is perfectly dependable as a preservative. For example, the microorganism Clostridium botulinum (which causes botulism), can only be eliminated at temperatures above the boiling point.

From a public safety point of view, foods with low acidity (a pH more than 4.6) need sterilization under high temperature (116-130 °C). To achieve temperatures above the boiling point requires the use of a pressure canner. Foods that must be pressure canned include most vegetables, meat, seafood, poultry, and dairy products. The only foods that may be safely canned in an ordinary boiling water bath are highly acidic ones with a pH below 4.6, such as fruits, pickled vegetables, or other foods to which acidic additives have been added.

Retrieved from "https://canning.fandom.com/wiki/What_is_Canning%3F?oldid=4280"
Community content is available under CC-BY-SA unless otherwise noted.